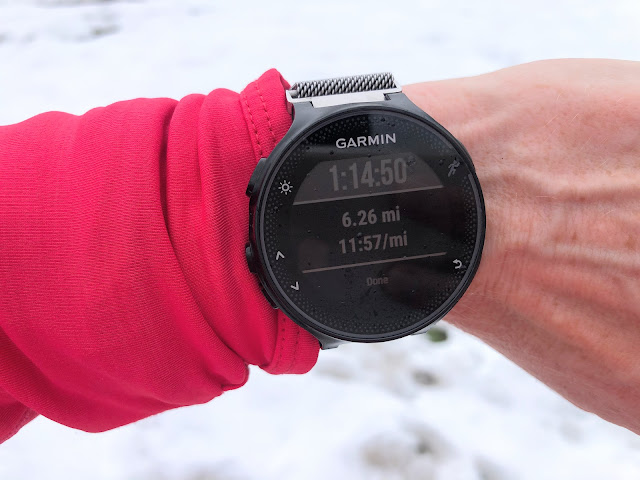 22.5 miles of running this week and SO MANY THINGS to talk about!

Let's start with Peloton, the app that you have heard about even if you live under a rock like me.  I have zero interest in spin bikes, but even I had picked up that that Peloton is much more than biking.  It's what all of the cool kids are doing for fitness.

I've been kind of at a loose end with fitness lately.  I've had to cut back on running, partly because I'm burned out and partly because it's December and the weather is not in my favor for outdoor fitness.  Toward the end of last week it dawned on me that there were about 30 days left in the year and the free trial for the Peloton app is 30 days so...it seemed like now is the time to try it.  I was specifically after strength workouts, but also thought that the treadmill workouts would be useful as I transition back to treadmill running.

Revelations after one week of Peloton membership:

So at any rate, I started with some of the stretching classes but found that the yoga classes are really good and just what the doctor ordered.  I don't think that anything is wrong that won't be fixed now that I'm aware of it and working on it.  Special shoutout to Aditi Shah 10 minute focus flow hamstrings class from Dec 1st.  I feel like my body is in a better place today than it was at this time last week, and I can't ask for more than that.  My prediction is that our monthly expenses will be going up by $12.95 a month in January.

Now let's talk about the weather.  Have you heard that snow days are a thing of the past now that schools have Zoom?  Not true.  We had a snow storm this week that was so bad that school was cancelled before one flake of snow hit the ground.  The kids have a staggered schedule where they alternate in person/remote days.  But the teachers are in school full time, so they weren't ready to go remote at a moment's notice so that's why we had the "old school" snow day.  Apart from the foot of snow, there was so much ice that our dog could barely maintain traction on our walks.  Indoors was the only viable fitness option this week.

BREAKING NEWS: looks like our snow day might be the last one in existence after all.  Over the weekend an emergency decision was made to switch over to 100% remote learning for the rest of 2020 due to rising COVID cases in the schools (actual cases plus the number of kids in quarantine due to exposure).  We had a good stretch of "normal life but with masks", now it's time for "hunker down until the vaccine gets here".

Anyway, here's what I did for workouts this week:

Monday: Runner's strength workout followed by a 4 mile treadmill run (1.5 miles with a class, 2.5 miles on my own with good ol' TV).

Wednesday: unplanned strength workout because why not, more stretching.

Thursday: 4 mile treadmill run, gold star for being my best treadmill run lately.  Using the word "best" loosely.  I did a quickie stretching workout afterwards and my legs felt like glass that was going to break (lesson learned, stretching right after a run does not work for me).  After lunch I found 10 minutes for yoga (the hamstring focus with Aditi Shah) that proved to be a miracle cure for my body

Friday: an off day.  We forgot to set our alarm and barely woke up in time to get the kids on the bus and the morning was a scramble from then on.  I did a strength workout at lunch and the idea of running just seemed unbearable.  So I didn't.  Yoga at night.

Saturday: the first day of the week where going outside was feasible.  I seized on it and got 6.25 miles.  The first three were incredibly difficult with a strong headwind.  I felt more like myself on the back half of the run (uphill but mostly tailwind).  Yoga at night.

Sunday: planned rest day...but another storm is rolling in tonight so I changed my plans and got a 4.25 mile run.  All signs point to more yoga tonight.

Posted by Birchwood Pie at 4:02 PM