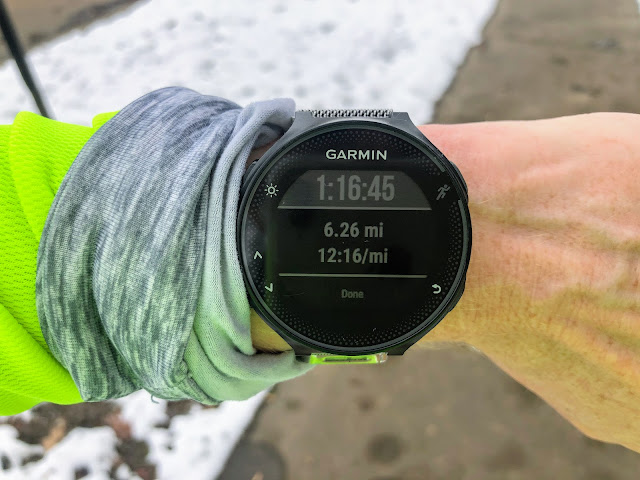 In this week's news: it was the best week of strength training I've had in a long, long time.  I'd say it wasn't a great week for running, except I got to run so that's not true.  19 miles of running.

Things going down in my fitness world:

Tuesday: usually I won't run outside if it's under 30, but it was a day when "under 30" was the only thing wrong...the roads were clear, the sun was out, and there was no wind.  I set out for 3 miles and found myself crawling.  No big, we all know that not every run is a great run.  The first mile eventually passed, then the second, and out of no where the word "strides" popped into my head and I started doing strides every time that I came to a cross street.  The third mile passed in a heartbeat, and I kept going for an extra quarter mile (my sneaky way of getting extra mileage) but got distracted and overshot my distance.  3.5 miles total for the day and all felt right in my running world.

Thursday: icy roads had me down in the basement.  3 miles with a bunch of 30 second speed bursts.  And yes, you may have noticed that I can't bear to do the sneaky extra quarter mile on the tready.  All told things felt pretty good.

Friday: weights and then 3 treadmill miles.  I was good and ran at an easy pace instead of trying to duplicate the previous day's speed bursts.

Saturday: whomp whomp.  Can we just not talk about this run?  OK, fine.  I wasn't feeling it from the get go.  It was hard.  It was slow.  There was a headwind in all directions.  It kills my ego every time that I see a >12:00 overall pace for a run.  BUT...I wasn't forcing myself to be out there and told myself that I could stop any time and never felt like stopping.  6.25 miles.

Sunday: off and looking forward to seeing what next week will bring.

Posted by Birchwood Pie at 1:18 PM