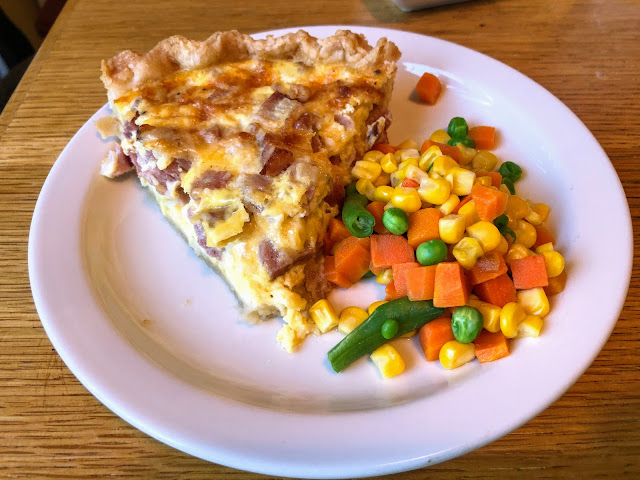 A weekly roundup: eats, watches, and reads.  The big news item of this week is that real men eat quiche!!!

I did the "three breakfast thing" on my running days and the "one breakfast plus snacks" on non-running days.  One of my many breakfasts this week was a bagel thin with cream cheese, avocado, and salmon. 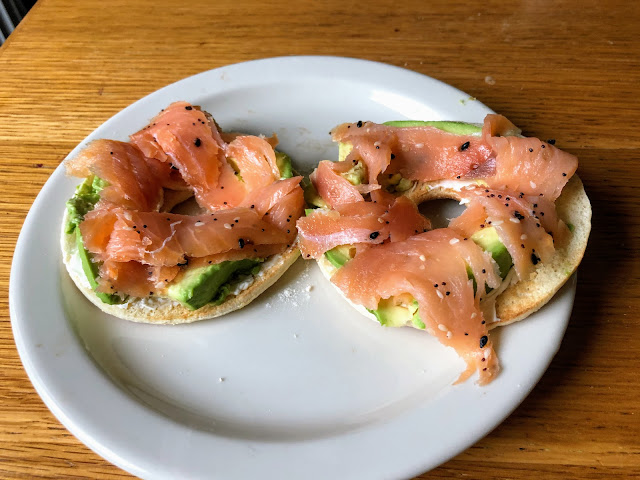 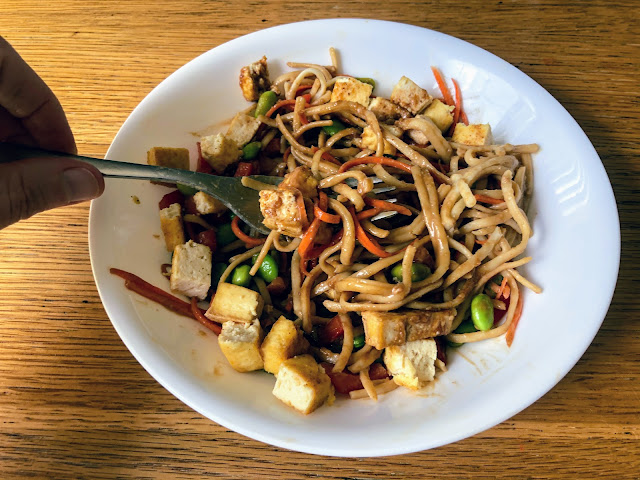 Monday: Quiche night!  The backstory is that we had mini quiches for Easter, and my husband always makes the joke that "real men don't eat quiche" which mystified the boys because I don't believe they've ever had traditional quiche.  That got me to thinking that I've never made quiche for a family dinner and BTW everyone in my family loves eggs, cheese, and pie crust so...

We had a few ham dinners last week and were still facing a mountain of ham which got me to thinking that...yeah quiche is a great way to use up ham.  Last week I packed up all of our leftover ham into quiche sized portions and tossed it in the freezer. 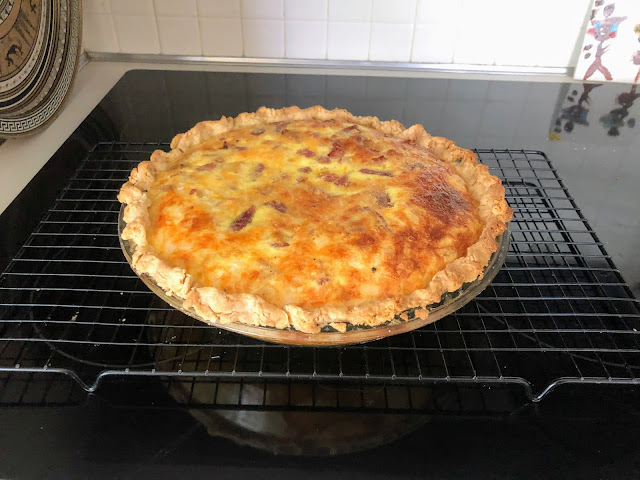 I made the crust the day before and rolled it out over lunch, and then took a quick work break at 4 to mix it all up and drop it in the oven.  Voila, at 5:00 we had a freshly baked quiche ready and waiting for us.  It was a hit so there will be more quiches in our future.

Tuesday: leftover spaghetti from Sunday.  I had the foresight to pick up a zucchini to zoodle up and add to my pasta. 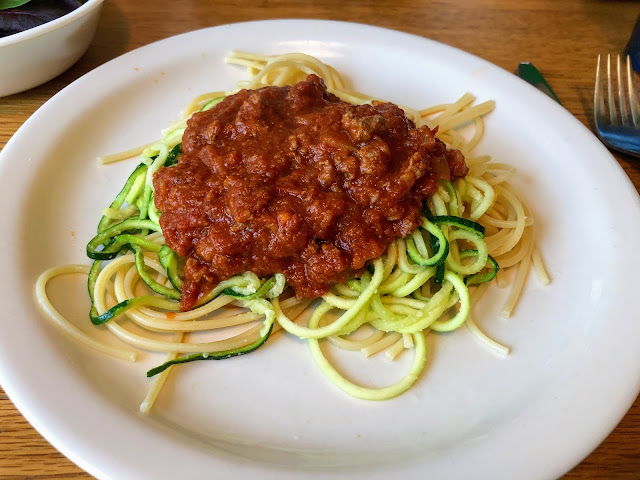 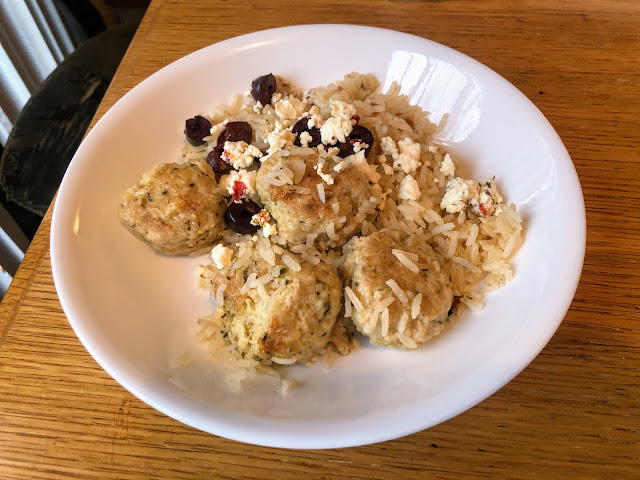 Pros: super easy, and the adults thought it was delicious.

Cons: oof one kid was not a fan.  His description of chicken meatballs, feta, and kalmata olives: "these flavors don't go together".  Both boys seem to have an odd association with kalmata olives.

Hey you miss 100% of the shots that you don't take...I won't make this for a family dinner again, but it's going in my date night recipe register.

Thursday: the kids had leftover quiche, hubs and I had salmon bowls. 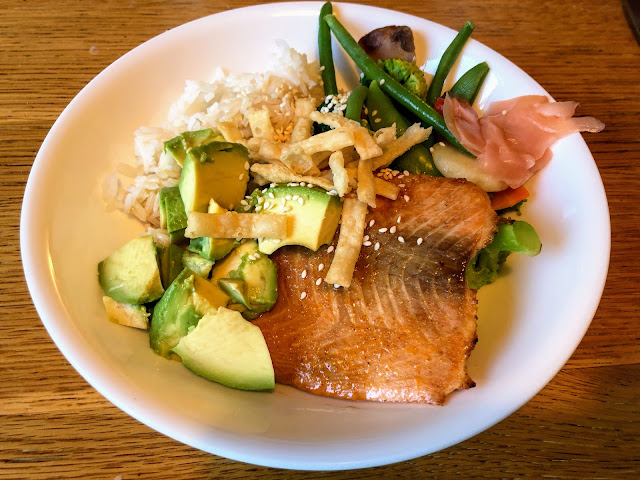 Friday: pizza night!  The menfolk had Papa John's, I made my own. 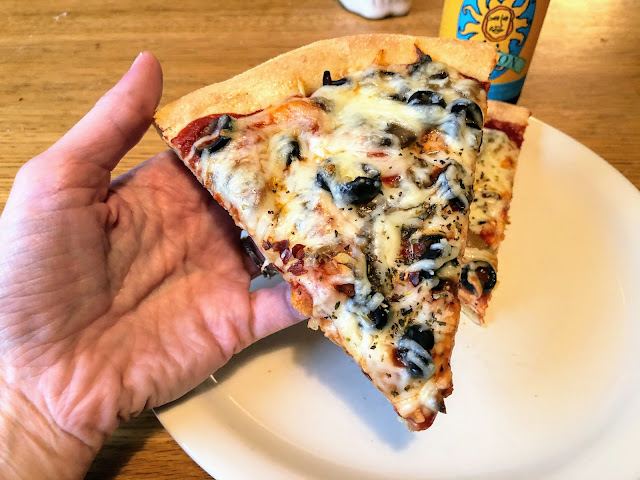 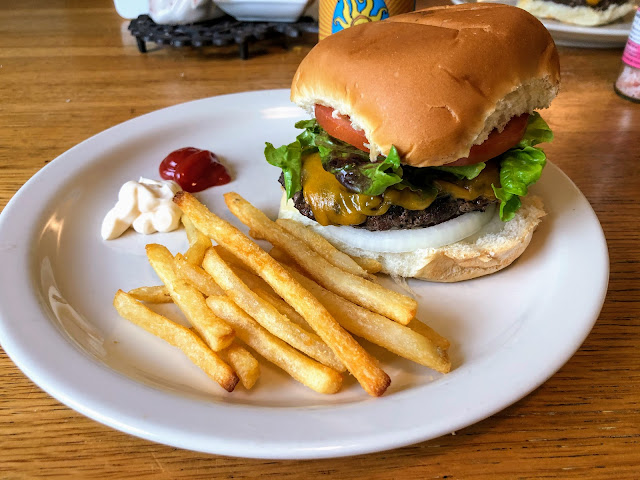 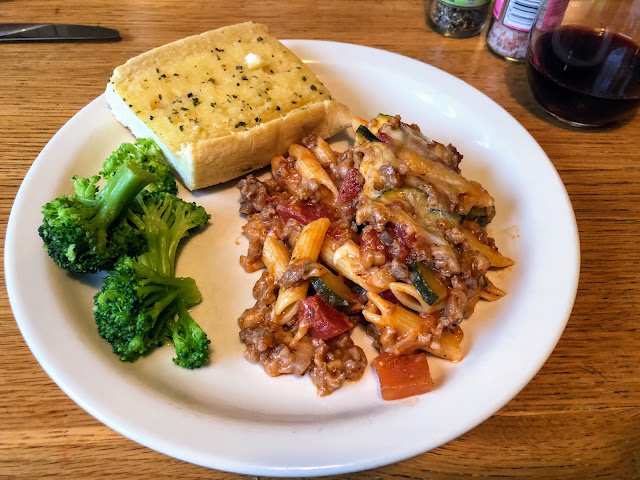 The curse of the "eat the same dinner from Sunday to Tuesday" was broken this week.  I don't expect this trend to continue, but wanted to point out that we made it happen once.  The MegaBig project that I'm working on has slowed down so I've had quite a few nights of being able to end work on time lately. 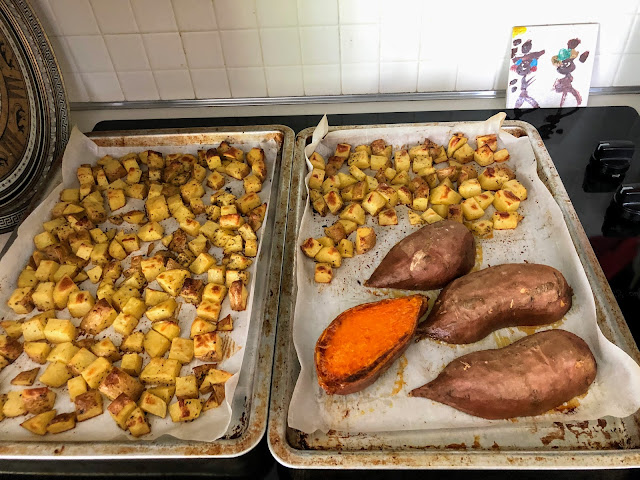 Early 90's throw down of two movies that I had never heard of.

First up: Bruce Willis as cat burgler in Hudson Hawk

Next up: Back to the Future of 2032 with Demolition Man

Still working on The Flight Attendant by Chris Bohjalian, still like it a lot.

I'm taking a break from podcasts to listen to an audiobook: Share Your Stuff, I'll Go First by Laura Tremaine, super interesting.

Posted by Birchwood Pie at 7:41 PM