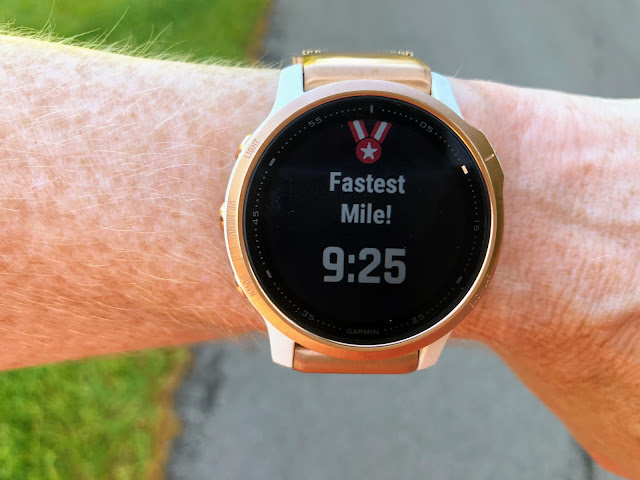 A weekly roundup: eats, workouts, watches, and reads.  In this week's combo weekly sweats/weekly eats edition there is nothing super genius to tell you about food, I did a mile trial, watched a fun movie, and my job situation continues to escalate.

Big shocker, I worked a lot this week, so meals were spotty.  Here's what we ate for dinner:

Tuesday: Chef Hubs made us chicken nuggets and mac n'cheese

Wednesday: Chef Hubs made us ravioli 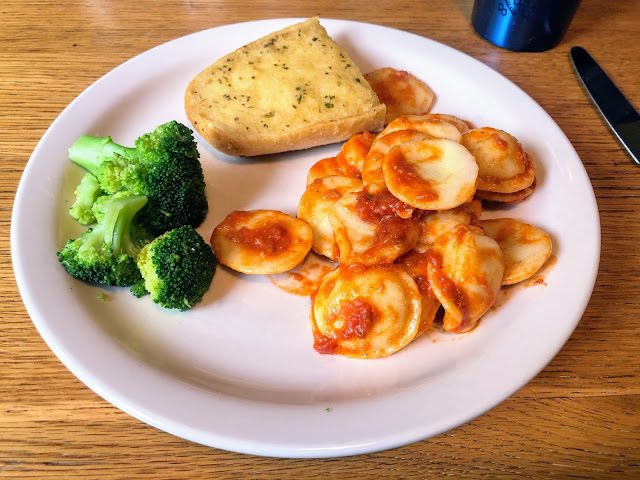 Thursday: Chef Me "made" chicken parmesan.  By "made" I mean our standard recipe of Costco panko chicken in the air fryer and Rao's pasta sauce.

Sunday: grilled flank steak and mashed potatoes.  Another so-so marinade.  Going forward I'm going to stick to the tried and true method of seasoning the steak with a spray of oil and seasoned salt.

On the strength front we are now the proud new owners of a 35# kettle bell!  The 25# one looks tiny in comparison.

In running news I brought home 24 miles to close out May with 120 miles total.  The beginning of the week was ungodly hot and predictably I crawled through those workouts.

Starting on Thursday we had a cold snap which was perfect timing for a mile trial.  I wasn't sure what to expect since I am nowhere near as fast as I was this time last year when I cracked out my record 9:08.  The only speed work that I'm doing right now is once a week hill workouts.  But when the time came I let lose and went after it.  Although I hated my life for the next nine minutes and twenty five seconds I also didn't feel like I was dying and was able to speed up toward the end.  Once it was over I had a few minutes of dry heaves so it's a no regrets situation.

After last week's 11 miler my long run this week was "just" 8 miles and the weather was chilly/ideal but I still struggled a bit. I was trying to figure out why long runs have been so hard in general and I started poking around into last year's training and whoa...I think I have the answer.  It seems like at the beginning of last summer that I stopped doing long runs without realizing it.  I just did a handful of 8-11 milers before my half last September, then the 2nd half two weeks later, then one 8 miler and the long run dropped after that.  I did longer runs during the week which disguised the absence of a long run on the weekends.  That's not how I remember things at all, but that's what the Garmin says.

An American Werewolf in London! Cast including Jenny Agutter who I know from Call the Midwife and Frank Oz who we all know as Miss Piggy.  It was great fun.

Nada.  I tried a couple of Big Recommendations and couldn't get into them.

Continues to disgust me and thanks for asking I worked all weekend.  For a few months now I've evaded working on Project Doom because I'm working on Project MegaBig.  Two weeks ago I told my boss that I wouldn't do Project Doom and repeated that the double workload from MegaBig plus my day job is getting to be a bit much.  My boss ended up doing my part of Project Doom last week and sure as the sun shines this week he put it back on my calendar.  I ignored him for several days and then hung up on him in our weekly meeting and haven't spoken to him or heard from him since.  Oh snap that was the same day that another member of my team quit (strangely enough he didn't seem to like the double work load either and I am so happy for him!).  My goal is to get my boss to escalate this with HR, which is the team that I am doing the other project for.  I think it will be more effective for him to go whining to them that I'm not doing my job and have them say "but wait she's doing MegaBig..." than it will be for me to say yet again "hi, I'm already doing two jobs".  My boss knows (or at least he SHOULD know) my workload but corporate won't give him a break on Doom so his cojones are on the line.  The rest of my team is working on Project Doom and they are carrying as many hours as I am and are quite miserable.  If they try to cut the hours short on Project Doom they get yelled at.  When they fall behind in their regular work they get yelled at.  The MegaBig team is quite humane in comparison.  Also MegaBig is a nice resume bullet point and Doom is not.

It would be nice to keep my job and the paycheck until I find another job/paycheck but at this point I don't give a rat's booty.  One of my coworkers said that I was ballsy, but that's not quite right.  I'm just fairly certain that I will not get fired before July and possibly not until the end of the year because I am the only person who does a pretty major thing for my company [warning: do not do what I am doing.  I've seen plenty of other Lone Stars like me get fired without a second thought...no one is irreplaceable].  A lot of my work will transfer to corporate with the completion of MegaBig, but there are things that we have to do in house until the end of the year, so I have some leverage.  If they fire me, they'll pay severance.  If I play along, I will be absolutely miserable and most likely get laid off in six months with the same severance and still have to find a job at the end of all that...by doing things my way I get to skip the "absolutely miserable for six months" part.  It's just the waiting for things to happen part that's tedious.

I had a second interview this week, which was just OK.  I really like what the company does and would be proud to say that I work there, it would pay more than my current job, BUT the interview process has gone on for a month and the job sounds like kinda a snoozer.  If I don't get the job I'm good with that, but if they do offer it to me then I have the temptation to take the "not quite right" job to spite my current employer.  I've gotten two job offers so far in my search (both had "not quite right" aspects to them so I passed), so logically if I just stay the course I should get more of the same.  Hubs is on board with the risk of me not having a paycheck for a few months.  I'd just be hella bored.  And it's always more satisfying to be the dumper than the dumpee.

What would you do in my work situation?  Take the "not quite right" job?  Quit?  Try to get fired?  Have you ever had a job that so was bad that you quit without having something else lined up?