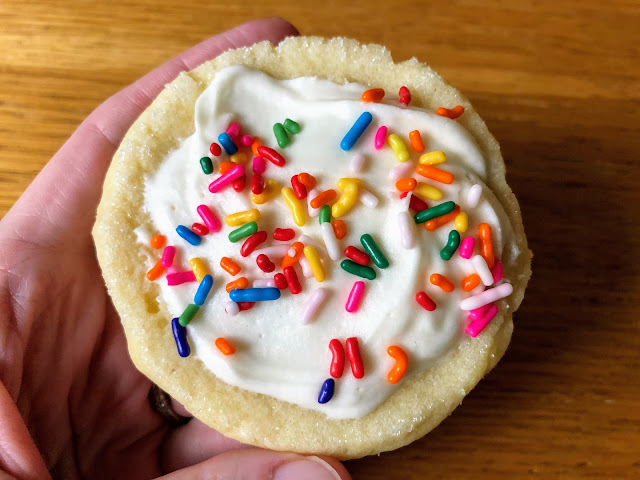 A weekly roundup: eats, workouts, watches, and reads.  In this week's edition I made my favorite frosted sugar cookies and watched a ton of movies, including the one that I said I would never, ever watch.

Ah meal planning...when we went to bed on Sunday night our fridge was loaded with leftover spaghetti and I'd gotten a steak out of the freezer to start thawing for a quick dinner.  Monday morning we woke up to find that the fridge door had been left open just a smidge overnight and we had to throw everything out.

My favorite thing that I ate last week was the pasta that I made for lunches.  I already told you about it, and I'm telling you again because the leftovers were even better than the first pass.

I had a very decent running week post-half.  My #1 goal was to start adjusting to the treadmill again.  For the first few weeks of my new job I need to be "camera ready' pretty early, which means finishing my workouts by sunrise.  My secondary goal is to learn not to stop during my treadmill runs.  On the one hand I don't think it's that big a deal to take a break here and there but now that I'm doing shorter runs it seems like a good time to try and eliminate the habit.

Monday: one and a half treadmill miles, 2 outdoor miles

Friday: four outside miles.  I was undecided whether I would run three or five miles and ended up splitting the difference.  As soon as I pressed the stop button on my Garmin, I felt like I could have run another mile.

Saturday: five outside miles.  Again, I was undecided how far I was going to go...as soon as I pressed the start button on my Garmin I felt pretty miserable.  I came into my groove in the next mile, but didn't want to push it.

Based on how I felt on Saturday, I was determined to go ahead and change my registration for my half marathon down to the 10k, but by the time I'd finished my shower I'd talked myself out of it.  Stay tuned on that one.

I'm just a few days in to my new job but far so good!  I've worked for US companies that did international business before but this is my first time working for an overseas company that does business in the US, so it's quite a different perspective.

The thing that prompted me to watch so many movies is the Unspooled podcast.  They cover one movie per episode, but they choose the movies in random order.  Several of the podcasts inspired me to see the movies, so that's how I ended up watching Platoon one day and Wizard of Oz the next.

Before this week here is how I rated the following movies (the number before the movie is the ranking on the AFI list, the order shown is the order that I watched them in).

Here is what I think of them now:

Platoon: whoa, no one told me that Willem Dafoe and John C. McGinley were in this movie!  I was not expecting to like this movie at all and really got into it.  Yes it's a tough watch but I felt that they handled the material well.  I hadn't shared my AFI plans with my husband and I think he was just a little bit surprised to come across me watching it on a weeknight but once he saw the TV screen he was right by my side.

Wizard of Oz: I should clarify that "haven't seen it" means "as a resident of the planet Earth for 46 years of course I've seen clips of this movie but as far as I can recall I've never seen the entire thing".  Like I've said before, I was afraid of dogs when I was a child, so I think that Toto was the initial turn off.   I had a real chip on my shoulder about not wanting to ever see Wizard of Oz, but after hearing the Unspooled episode I had to give it a shot.

Now that I've seen it for reals (reels?):

2001: A Space Odyssey: the best part of this movie was that the rest of the family wanted to see it as well!  I'm not much of a sci-fi fan so I didn't really get in to the "out there" parts of the story but I did appreciate the visuals and the soundtrack and my mind was blown.  I'm totally Team Hal.

The Shawshank Redemption: I was expecting something deathly boring and instead I got something that I loved!  I loooove this movie.

Bonnie and Clyde: As amazing as so many of the AFI top 100 movies are, I think it's fair to say that no one adores all 100 of them.  I'd seen Bonnie and Clyde a long time ago and didn't really remember it, but the Unspooled crew raved about it so I gave it a rewatch.  Oof, this just wasn't a winner for me and I came close to turning it off a few times because it just wasn't holding my attention.

Also of interest is Grace's follow up post on her AFI progress.  She seems to be the only other person on the planet besides me who isn't into the Godfather.  She writes that she's "a bit sad that I'll have to watch part two as that one also made the list".

Where will I go with this from here?  I doubt that I will watch all 100 movies, but now that I'm up to a C- I think that a good (read: achievable with everything else going on in my life) goal is to aim for a B (80 or more movies).  I am really impressed/in love with what I've seen and none of them are movies that I would typically have watched.

I finished The Last Girl by Jane Casey, which was very good and I'll be checking out other titles in the series.  Currently rereading And Then There Were None by Agatha Christie.