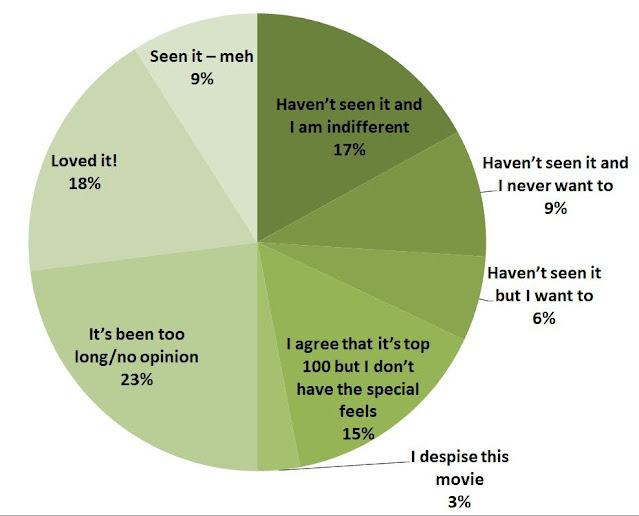 I really enjoyed Grace's post One of my "Just for Fun" Goals.  She is working her way through the American Film Institute's 100 Years 100 Movies List.  She included this link to the AFI's checklist that you can click through to find out how many of these movies you've seen.

It turns out that I've seen 68 of the 100 movies, but as I got to thinking about it, I realized that there is a lot more to this list than what I've seen vs what I haven't seen.  It's how I feel about the movies.

The movies that I've seen fall into the following categories

The movies that I haven't seen fall into the following categories

Will I ever watch all 100 of these movies?  Looking at my "I haven't seen this but it doesn't leap out as something that I want to see" list, I just can't imagine sitting down to even one of these movies let alone all 17 of them - that's alotta movies and I need a better reason than "they're on the list".  But I will give you a counterargument, which is the movie Taxi Driver.  If you'd asked me about it last year, I would have told you that it was a movie that I never, never, ever wanted to see because I'd heard really bad things about it.  Specifically I'd heard that it was violent.  I ended up watching it because my husband wanted to see it and now it's on my "I loooooove this movie" list.  So maybe someday I will join the century club.

Here are the lists.  The number in front of the movie title is the ranking on the AFI 100 list.

I haven't seen it and I want to

I haven't seen it but it doesn't leap out as something that I want to see (a.k.a the "Westerns and War Movies" list)

Now let's flip over to what I've seen

1. Citizen Kane (1941) - the #1 movie on this list leaves me cold.  Yes it's innovative but so were a billion other movies of the time.  Orson Wells just isn't my guy (unless we're talking about The Third Man (1949), that's a top 10).
17. The Graduate (1967) - I didn't remember this movie very well and rewatched it after I saw Midnight Cowboy last year because I wanted to see more Dustin Hoffman.  Loved Anne Bancroft, hated everything/everyone else.
51. West Side Story (1961) - a few years ago we tried to watch it at a family party and ended up turning it off after an hour that seemed like an eternity and we will never get that hour of our lives back.  Soooooo long, sooooo boring.  So many other great musicals that could go on the list in its place.

Your Turn: how many of these movies have you seen?  Do you disagree with my "hated it" list?  Is there anything on my "loved it" list that you hate?  Is there a movie that you loved on my "never want to see it list"?  What should I watch first on my "I've never seen it but want to" list?