Weekly Round Up: Upgrade Edition 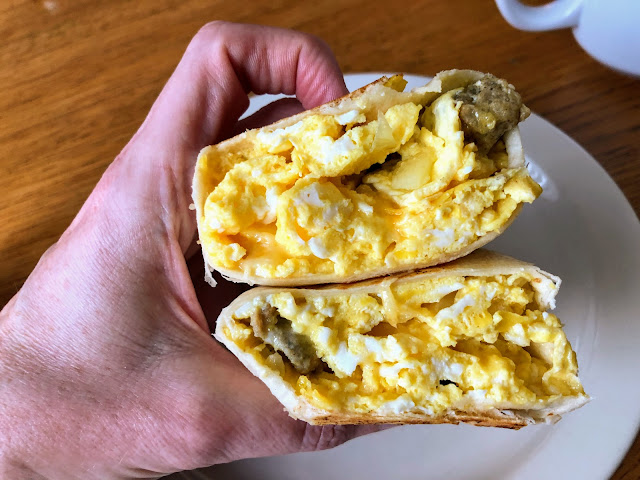 A weekly round up: eats, workouts, watches, and reads.  This week I upgraded my breakfast burritos, learned that ground turkey tastes just like chicken, I got more racing bling, and someone in my house got an offer that he couldn't refuse.

I've been using the same breakfast burrito recipe forever (circa 2013 - thank you blog archives!).  Black beans, eggs, cheese, and salsa and it's a very fine thing to be able to pull out of your freezer and heat up in a few minutes.  It ain't broke and I would never have fixed it except that when I went to Chicago last week I had a vacation fling with Trader Joe's Chicken Sausage Burritos.  I was surprised at how much I liked them, given they are not spicy in the least and I'm a salsa freak.  I found a lot of novelty in the simple ingredient list of eggs, potatoes, onion, chicken sausage, and cheese. This weekend I got down to it and took my first shot at a homemade version.

For my starter homemade version I assembled:

I took my best guess at potato to egg to sausage ratio and added a sprinkling of cheese and wrapped everything up in tortillas and toasted them up in a skillet.

The verdict is that I think I need to increase the amount of potatoes and possibly the cheese but what I came out with was very yummy and a nice change up.  I only ended up using half the batch of potatoes so I'll either eat those just with eggs or make them up into more burritos in the next few days.

On Tuesday Damn Delicious's Creamy Beef and Shells popped up as a suggested read and I realized that it would be very easy to make for dinner that night.  I had all of the ingredients except for onions, so I subbed onion powder and hoped for the best.  Obviously it would have been better with the onions but what we got was still pretty darn good. 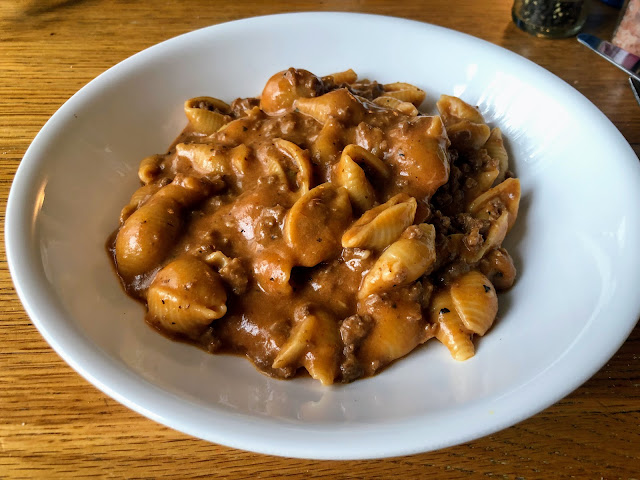 On Thursday I did a repeat of the beef stir fry that we tried (and loved) a few weeks ago, but I substituted Costco frozen stir fry veggies for the snow peas. 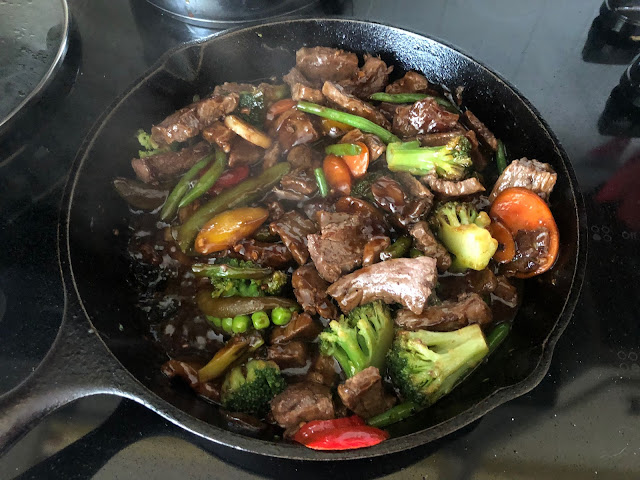 On Saturday the hubs and I decided that chicken burgers were in order, so I headed out for my first grocery trip of the week and found that whomp whomp the store had no ground chicken.  Logically I knew that ground turkey would be perfectly fine though I shuddered since turkey is one of my least favorite foods on the planet. 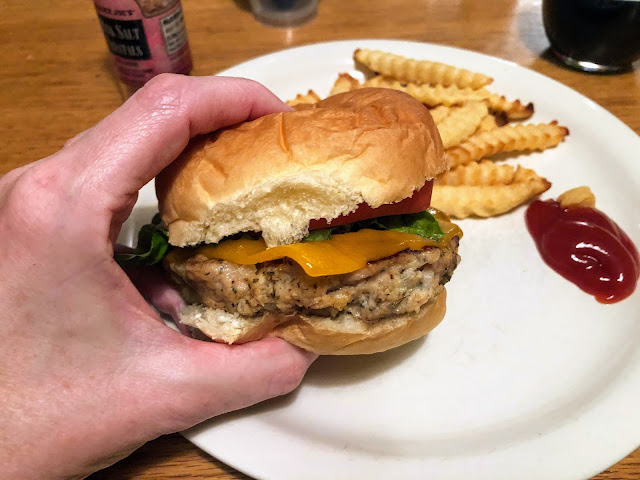 Verdict: it could be my imagination, but the consistency of the burgers felt a bit drier when I was mixing them up.  Once they came off the grill though, they were just fine...lol they tasted just like chicken.

Saturday was a day of firsts for me.  I needed to run 10 miles for my half marathon training plan, and there was a new-to-me race that I wanted to check out.  The event was a 2 mile race at 8:30, a 5 mile race at 9:15, and an option to do both races for not very much more than the cost of the 5 mile race.  I'd heard of combo races before, but I'd never run one.  The other thing that I had never done before was to include a race as part of my long run, but I've been itching to do it since Catrina wrote about it (as I have mentioned before, I don't just read running blogs, I take notes).

How it played out was: 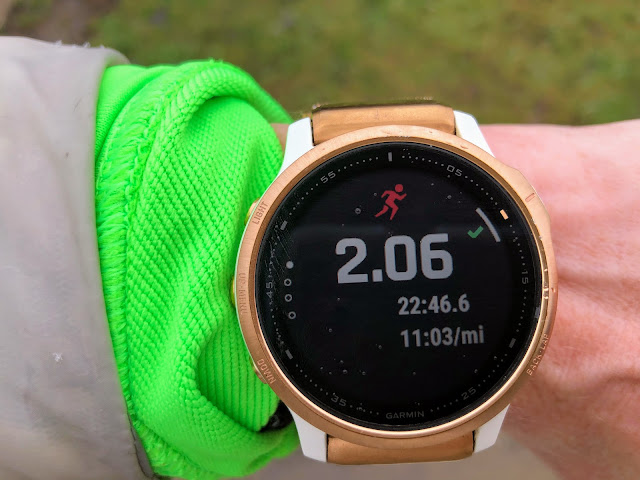 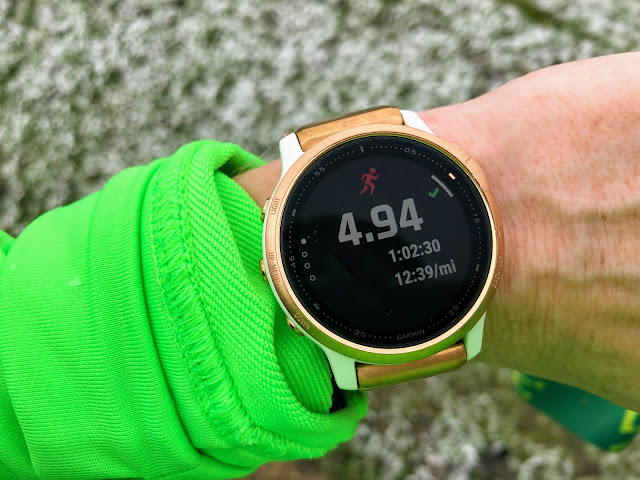 I try not to get obsessed with numbers more than I already am, but what are the odds of a 2 mile race being 2.06 miles and a 5 mile race being 4.94 miles for a total of 7 miles even?

As far as combo races go, yes I would try one again, but I'm at a loss as to how to balance my energy between the two races.  Next time I'll have to try running the first race slow and the 2nd race fast.  Using a race for part of a long run seems like a winner, and spoiler it just so happens that in two weeks there is a 10 mile race the same weekend that I have an 11 mile long run.  I'm going to wait until closer to the race to register so that I can get a better idea of the weather.

Sigh, I finished season 4 of The Marvelous Mrs. Maisel and I found out that the next season will be the last.  I mean fine, the show can't go on forever but I will miss it.  My next treadmill show will either be season 2 of Fauda or season 6 of Outlander.  It's not an either-or, it's a "which one's first" decision.

Second up was Sunrise, which is one of my all time favorite movies that I've seen a billion times (previously here).  This rewatch was motivated by the Unspooled Podcast.  I haven't finished listening to the episode yet, but so far they've echoed exactly what I said here, which is that they're torn between being happy that the movie is even on the AFI Top 100 list to start with and being irritated that it's only #82.

What hubs and I have in common is that we both like good movies, but my definition of what's good leans more toward the classic/silent era than his does.  We were both doing our own thing on Saturday night when I put the movie on and he happened along during the opening credits and it was a happy surprise that he was down to join me.

The movie deals with a married man who is having an affair, which prompted hubs to ask "how are people having affairs these days now that everyone's at home?"  We thought about it a minute and then he said "oh that's all of those people who are dying to get back to the office".  Ah ha mystery solved!  (In the case of the movie the husband is a farmer who is meeting up with the other woman out in the fields at night, so yes, at the office).

I stayed up late last Monday to finish 56 Days because I'd gotten to the point where I just couldn't put it down. YES YES YES YES this is a good one.

Normally I don't read the same author back to back but in this case I've got an itch and I'm scratching it.  I started The Liar's Girl, which was the book before The Nothing Man.

Somebody in my house got a job offer this week!  Yes I have my work drama and the hubs has had his share right along with me.  He started a new job a few months ago that pretty quickly became a mess of alternating periods of boredom and stress.  Like me, he channeled his frustrations into looking for a new gig, and like me, he found plenty of frogs looking for a kiss.  We have a running joke because I'm an accountant working in startup/tech industries and he's a software developer working in old school/super boring industries.  He wasn't having problems getting interviews, but each one seemed more dull and boring than the next.  Last week a company contacted him on LinkedIn that seemed to be a bit less of the same old cookie cutter.  Not only did he enjoy the interview but so did they because the next day they made him an offer that he could not refuse (or as I would say, an offer that he deserved).  He's now counting down the days at his loser job and getting ready to hang with the cool kids.  It seems like I will lose my status of having the coolest employer in the house temporarily.  He got quite the upgrade!

In my own realm of frog kissing:

Posted by Birchwood Pie at 8:44 PM