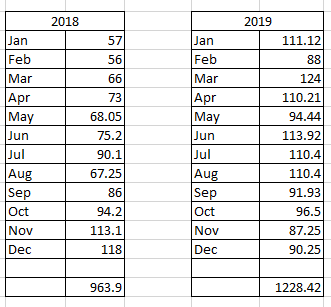 Before we get started
I am not qualified to give advice on any subject let alone running.  This is what works for me and the trials and errors that got me here.  The only thing I know for sure is that you should do you.

My Running Plans for 2019 (here)
What actually happened in 2019
Why I Run
Because it's awesome.  My running backstory is here.
2019 Race Recaps
11 Races, 82.2 miles, a 5k PR and all the firsts==>first half marathon, first 10 Miler, first 5 Miler
Biggest Takeaway from Racing
Bad races happen.  Deal with it.  The only thing that a bad race means is that is was a bad race.

Biggest Takeaway from Running Half Marathons
They are awesome.  As tough as my first half was, there was something about crossing the finish line and finding a medal around my neck.  I don't like to tell anyone else what to do, but...if you've ever entertained the idea of running a half...please do it.

Other Running Things That I Did This Year
Running Issues that I Dealt with in 2019
Few and far between.  I was blessed with no injuries and very little sickness this year.  Some of that is common sense (if something hurts I back off) but a lot of it is sheer luck and good fortune.  Every step is a blessing and I am overwhelmed with gratitude that I get to do this.

Apart from the sports psychology issues that came up from my first half marathon and the terrible 10k the month after that, my biggest issue was burnout from trying to run All The Miles.  I dropped my mileage toward the end of the year and have definitely been getting More from Less.

Best Running Tips of 2019
Pairs of Shoes Purchased in 2019
Only 2!  And I haven't used the second pair yet, I got them a few weeks ago because they were on sale for a price I couldn't pass up.  I can't say enough good things about Brooks Launch, my first pair lasted 500 miles (my outdoor shoes), and to be honest I'm only retiring the 2nd pair (my treadmill shoes) based on mileage to be conservative.

Speaking of the Treadmill...
I got outside a lot in 2019!  I am shocked, shocked that I only ran 405 treadmill miles, I would have expected the number to be much higher.

Bear with me because I've said this before, but the reason that I run on the treadmill so much is that my primary goal of each run is to come home safe to my family.  I just do not feel safe running outside in the dark, it's not a "people" issue, it's a little bit of an animal issue and a lot of a tripping and falling issue.  I haven't found a running light that's bright enough for me to see my way in the dark, so I opt inside on weekday mornings for most of the year (OK, OK I'm also not the biggest fan of the cold).  The tready can be tedious but to my mind it's a lot less tedious than recovering from an injury.  And I get a lot of my TV watching done on the treadmill, so there is that.  Emily Toia does all of her training on the treadmill and Jared Ward did a lot of his Boston training on the treadmill, so I feel like I'm in good company every time I hop on.


Best Running Blogs of 2019
What's in the Forecast for 2020?  Imma keep running
(Side bar: I've gotten through nearly nine years of blogging without saying where I live and the only time I regret it is when I write about races...my hometown marathon is the best race in the world and I'd love to brag on it, and there's a really unique historical aspect to the Christmas 10k that I'm dying to talk about...I've gone back and forth on the location issue and for now I'm sticking with it BUT with that said it feels so good to finally put a name on a race.)
Happy Running Everyone!
Posted by Birchwood Pie at 11:50 AM