Weekly Eats: Another One Bites the Dust 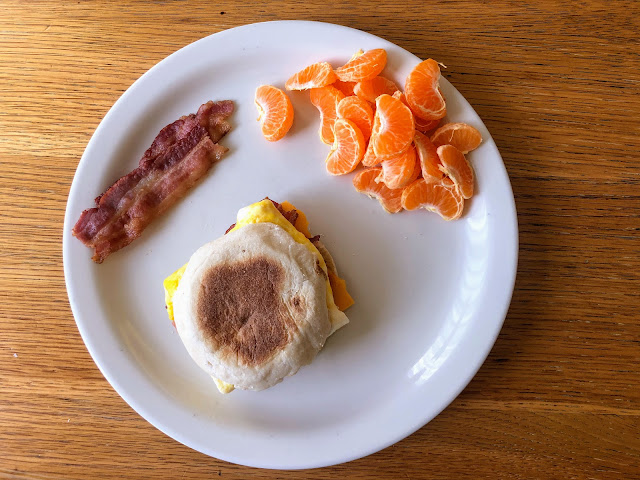 A weekly round up: eats, watches, and reads.  This week I kicked a "diet" food out of my life in place of the real thing, learned that a freezer experiment paid off, and found a yummy new runner's snack.

I've been on quite the English muffin kick recently.  It used to be that I'd buy a pack every month or so, eat one, and toss the rest in the freezer, but lately I'd say that I've been getting a pack about every two weeks and am not bothering to freeze them anymore.  My two major uses are with cheese as "second breakfast" on running days and homemade breakfast sandwiches.

Ten (!) years ago when I started this blog I see tons of things like low fat sour cream that I wouldn't have believed that I ever ate if I didn't have pictures to prove otherwise, and now with the exit of 100 calorie English muffins, my "diet" foods are down to bagel thins and lite butter.  A month of so ago there was a bagel thin drought at the grocery store and I had "phat" bagels and didn't really care for them, so I think that bagel thins are staying on.  My #1 use of lite butter is on toast and waffles, so probably an average of once a week, so that's probably another one that could (should?) go by the wayside.

Yes Virginia there is a Santa Claus!  My big discovery of the week is that if you make a big batch of barbacoa beef, freeze the leftovers in small portions, and then forget about the whole thing for a few months that the beef comes back as good as new.  I often find that meat doesn't reheat very well, which leads to me not having very much of it in my leftover-driven lifestyle, so it's always a pleasure to find an exception to the rule. 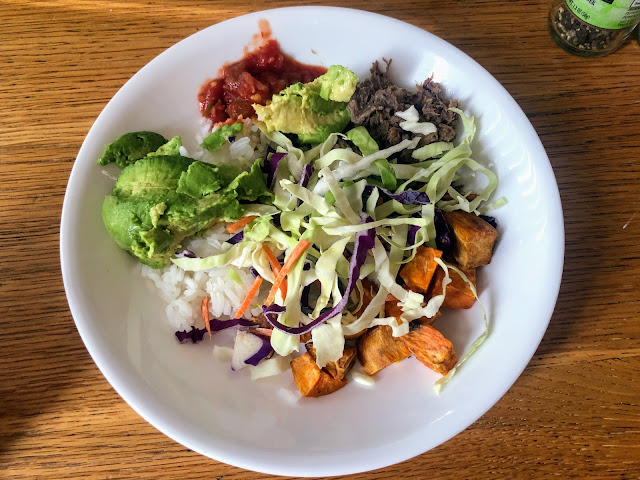 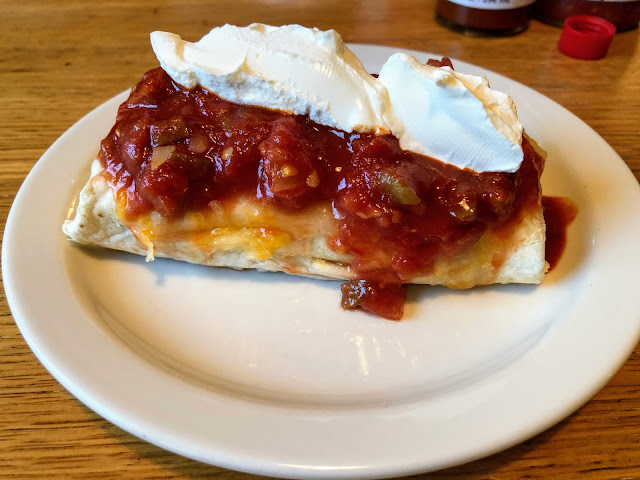 Wednesday: the boys had dinner with their mom, hubs and I treated ourselves to Chipotle.

Thursday: both boys have been killing it in school, so we (the boys and I) treated ourselves to a sushi night.  My sushi-hating husband had stir fry.  When we put our order in stepson #2 told me that he wouldn't be able to eat the entire roll, and I told him not to worry since his brother and I would help him out.  Well buddy, that might have been true the last time we got sushi (about a year ago???  it's pricey so we don't have it often) but it isn't true now since the whole roll went down and had a bunch of rice chasing after it.  Those growth spurts tho! 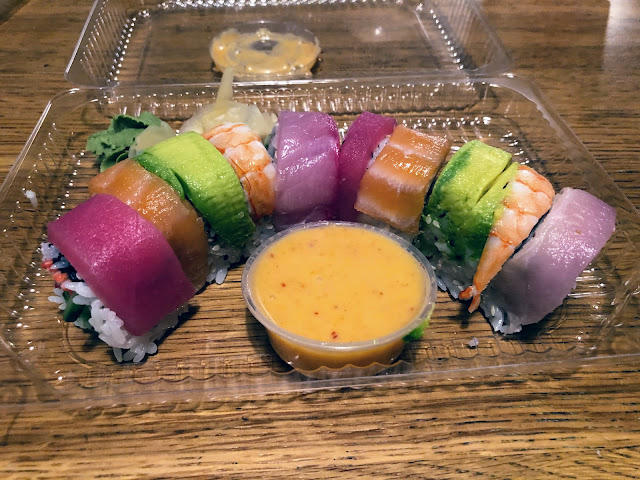 Friday: out on the town to the drive in hamburger place.

Saturday: takeout from the Lebanese place. 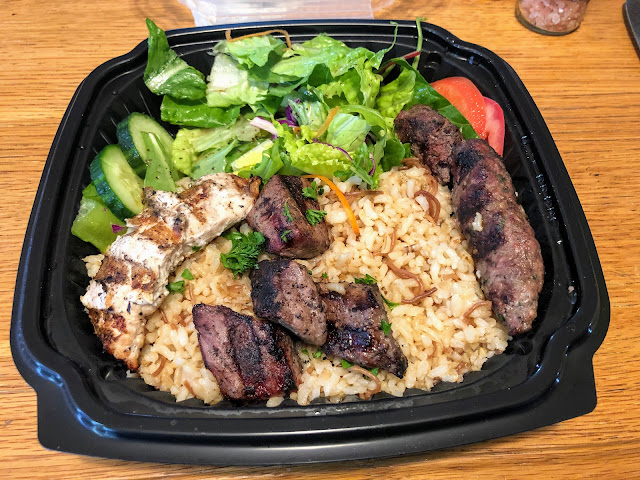 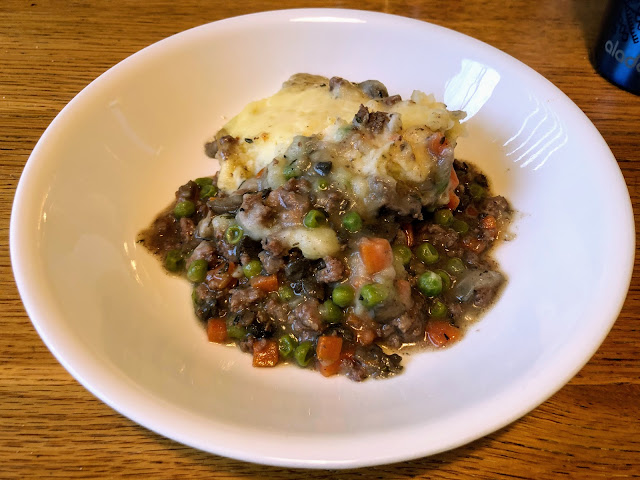 There's a new player in my runner's snack stash.  My pre-run go-to's are Clif bars on hard workout days and Trader Joe's This Fig Walks into a Bar for easy days.  Both work, but they're getting a little monotonous.  When I saw Featherstone Nutrition's bourbon sweet potato snack cookies on instagram I thought that they were worth checking out. 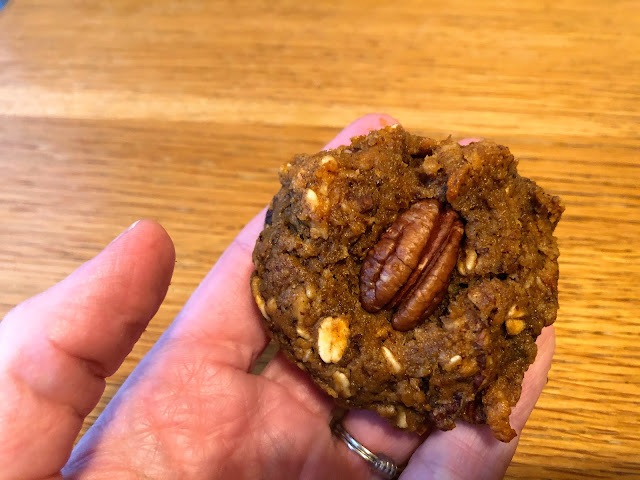 I baked up two sweet potatoes instead of measuring out 1+3/4 cups so I think I had a bit extra and ended up getting 18 cookies instead of a dozen.  I haven't had one pre-run yet but I plan to this week and I'll keep you posted.  What I can tell you is that they are a very good snack.  Yesterday I ran a race and was feeling like I needed to eat the entire kitchen and one cookie calmed me down.  This morning I had one for a mid-morning snack and it filled the gap between breakfast and lunch nicely.  They're good at knocking out hunger, and they're tasty but not so tasty that you're going to snarf down the entire batch.  I definitely recommend.

It was a lite week for the TV around here.  I took care of some planned spring cleaning last week.  Hubs and I knocked back a few more episodes of High Maintenance.

I finished Mildred Pierce, which I very much enjoyed.  ISO of the next read.  I don't have anything lined up and I'm going to take my time.  My goodness, with the lack of TV and books I might even break out my stash of blog post ideas that I've been sitting on and get writing.

Question of the week: what "diet" foods do you still eat or have you phased them out?  I'm not sure whether I was driven more by realizing that a few extra calories here and there wasn't going to do anything to my weight one way or the other or if it was running that pushed the low-cal stuff out of my life.

Posted by Birchwood Pie at 8:33 PM