Weekly Sweats: The End of the Solo Act 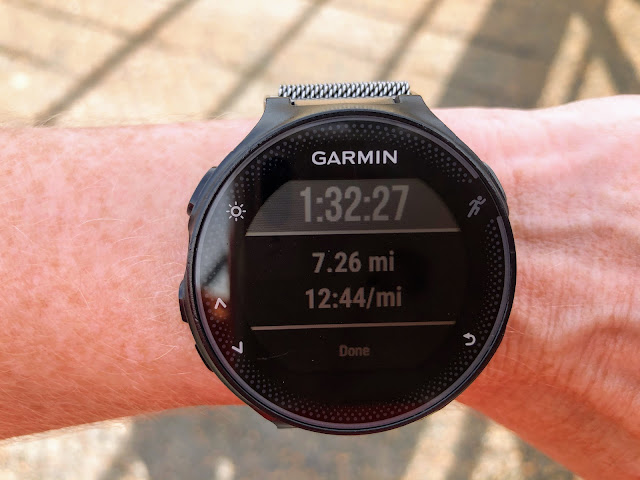 In this week's edition: 28 miles, some random body weight strength work here and there, and the end of my solo act.

My last day of acting as my own unlicensed, unqualified, and uncertified trainer is today.  Starting tomorrow, a professional takes over.  Let me take a moment to tell you about this week's running and then I'll go more into the coaching thing.

Monday: 4.5 miles and then a trip to one of my state's new mass vaccination centers to start filling up my v card😃

Tuesday: I had a "vaccine hangover" of fatigue and brain fog that dictated a rest day.  In the evening I could feel that things were starting to lift, so I decided to take a short spin and see how things felt.  Verdict: a slow run of 3.25 miles definitely helped.

P.S. Side effects are out of my control and more than worth it.  The only thing that I wish I had done differently is to move my arm more through out the day to see if that would have cut down on the soreness as bit.  Although the soreness was worse than a flu shot, it also got better faster.

Wednesday: What a difference a day makes.  As soon as the first rays of daylight hit, I was out the door for 3.5 miles.

Friday: we had a major storm in the morning to the extent that it wasn't safe to run outside and the power was flickering so it also didn't seem like a good idea to run inside.  By late afternoon everything was calm so for the third time in two weeks I headed out for a run in the P.M.  4.25 miles

Saturday: this runs goes to the heart of why I'm firing myself as my coach.  Honestly I probably should have just skipped my Friday run because going into a big ol' long run just over 12 hours after my previous run was a predictable flop.  Yes it was a hilly route and yes it was hella windy but beyond that I was lacking pep in my step.  7.25 miles and I did 4:1 run-walk in the final two miles.

Why I'm Firing Myself as My Coach

As my own coach I've taken myself from couch to a 30:11 5k in a mere 10 years.  The things that are driving me to switch over to a professional:

I previously talked about my progress from April 2019 to April 2020 (P.S. thank you SmashRun!)

September 2020 stands as my best/fastest month as a runner ever.  Let's take a look see where things are now:

Is anyone looking at the numbers and saying, "yep, this girl knows what she's doing, she should absolutely stay on the self-coached path"?
I can't figure out how to get myself out of this slump.  Yeah I like running but I would like it even better if I was performing at my September 2020 levels.  On the strength training front, I've been able to "follow the book" but after 3 months I'm starting to lose interest and I have serious questions about whether I'm doing things correctly.  I'd kind of settled on continuing on my own until my next half marathon in May, but when it was cancelled I realized that I was truly at the end of the self-coached road.
I've been bouncing around a few ideas about who I wanted to work with.  A local name really stood out, so I contacted that person this week.  Although we'll be working virtually, by going with someone local I have the option to do in-person sessions, she's run all of my area's races, and hey it's always nice to keep the dollars local as well.
We've emailed and talked and are starting business on Monday.  I like what I see on my plan (spoiler: a bit less volume).  As soon as we figure out our schedules we'll do some in person strength work to evaluate what's going on there.  I have a really good feeling about this.
Posted by Birchwood Pie at 1:08 PM