Weekly Round Up: A Trip to Trader Joe's 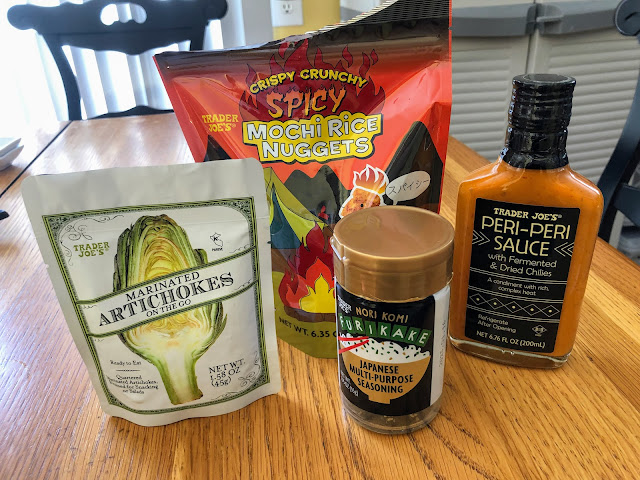 A weekly round up: eats, workouts, watches, and reads.  In this week's edition I went to Trader Joe's for the first time in a long time, I've picked my next race, and I rewatched an incredible movie on the AFI Top 100 List (that I was not expecting to like).

We had another massive storm and cold spell, but it got the kids two snow days so it was worth it.  We're also starting to get some above freezing days here and there.  I can see the light at the end of the winter tunnel.

I haven't written about anything TJ's related in a good long while.  The nearest store is half an hour away, and in a former life it was very close to my work.  Even after the pandemic started I still had to visit the office occasionally, so it was easy to skim off a little work time to visit.  Now I have to go on my own time;-)  Also there hasn't been anything blog worthy in the past few visits.  We were critically low on fig bars (a favorite family snack and there really is no non-TJ's equivalent) and the roads were clear so I got up there this weekend.

In addition to fig bars, there were a few bright and shinny new things to try out:

Same old same old treadmill by weekday and a token outside run on Sunday.  The only noteworthy thing is that I've got my next race booked.  Next Saturday looks "not awful" for weather, so I signed up for this race that I ran in 2020 (lol, nothing like going back in the prepandemic archives).  It's a prediction race, meaning that you have to predict your finish time and you're not allowed to have a Garmin or any electronics on the race course to tell you how you're doing.  Your placement in the race is how close you come to your finish time.  I went with 34:37, which was my finish time from my last 5k.  Tune in next week to see how things play out.

In the ongoing saga of AFI Top 100 movies that I've rewatched after hearing their Unspooled episodes, it was Katharine Hepburn week.  True confession and possible unpopular opinion: a little Katharine Hepburn goes a very long way for me.

Overall it was a "meh" but it was fun to see all of the antics, including "I just went gay all of a sudden" - here's the best 22 seconds of the movie:

Next up was The Philadelphia Story, which I previously rated as "meh."  I remembered a bunch of horses and rich people and not much else.  After Bringing Up Baby I was fully prepared for a dud (a.k.a. something that I was going to let play out in the background while I did other things).

I was so wrong!  I don't know what kind of mood I was in when I saw this before but my take now is that this is Top 100 worthy and one hella good movie.  I'm totally in to it (P.S. I've been watching it on the treadmill and I'm 15 minutes away from the end as of this writing so I'm on a bit of a cliffhanger because I don't remember the ending.  I mean there's no other answer besides she gets back together with Cary Grant but I legit don't remember.  Thanks to Grace's recap I'll be checking out High Society next (a remake with Grace Kelly of course I'm into that).  And some more Katharine Hepburn as well to see if there's something more in the canon that might be up my alley.

And it occurs to me now that since I finished North by Northwest on the treadmill on Monday and then went to Bringing Up Baby and then to Philadelphia Story that I might just as well have said that it was Cary Grant week instead of Katharine Hepburn week. But Katharine does kind of steal the show.

Eh, there's no sugar coating this.  I liked The Four Winds by Kristen Hannah up to the last chapter and then things went downhill real fast for me.  I really could have done without the ending.  Moving on!

I moved on to The Maid by Nita Prose which everyone is raving about.  I like it so far but I will just throw this out there that I'm getting a strong Eleanor Oliphant vibe from it (a book that I loved, but I'm hoping that Maid will bring something more to the table besides an Eleanor refresh).

Posted by Birchwood Pie at 9:27 PM