Weekly Round Up: Player 2 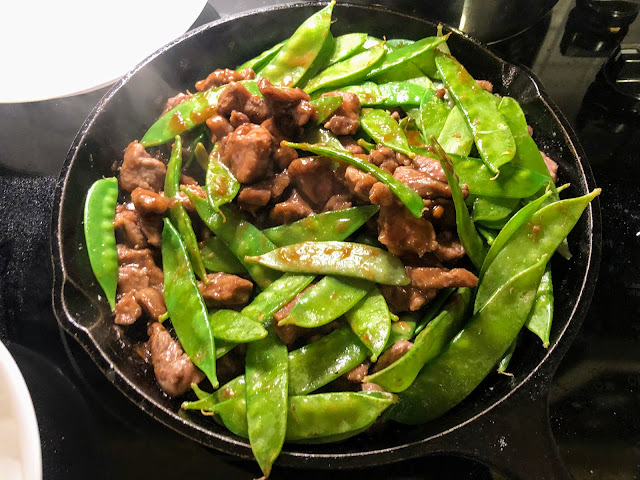 A weekly round up: eats, workouts, watches, and reads.  In this week's edition I tried two new recipes and revisited two old ones, winter is fleeing the scene, and Player 2 has entered the game of my kinda-sorta-probably job search.

The most exciting thing that I made this week was Beef with Snow Peas (idea c/o Life of a Doctor's Wife).  It was easy, came together quickly, and as a bonus there was one portion left over that made a delicious lunch.

I tried a tofu recipe earlier in the week for lunch that was just so-so but it left me with a good amount of air fried tofu that I needed to do "something" with.  The stars aligned because I ended up having a single girl night on Friday so I whipped up some General Tso's sauce and raided the freezer for rice and Costco stir fry veggies along with some green onions that were hanging out in the fridge.  My sauce recipe was just OK so if you have these ingredients in your fridge, just google a sauce and I think you'll come out as good or better than I did. 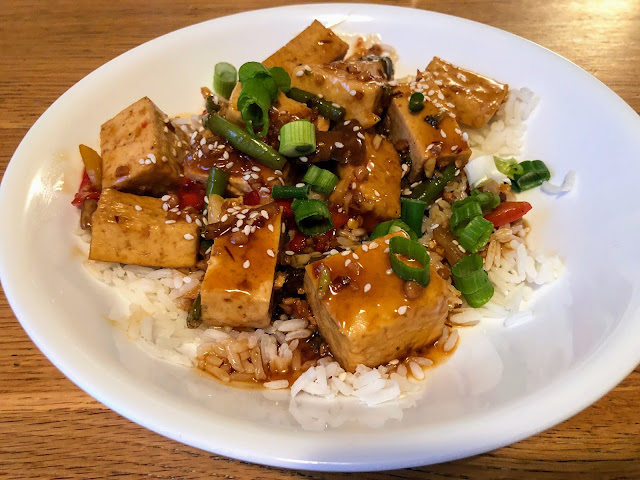 For repeat hits, we had Instant Pot Copycat Chipotle Chicken burritos one night. 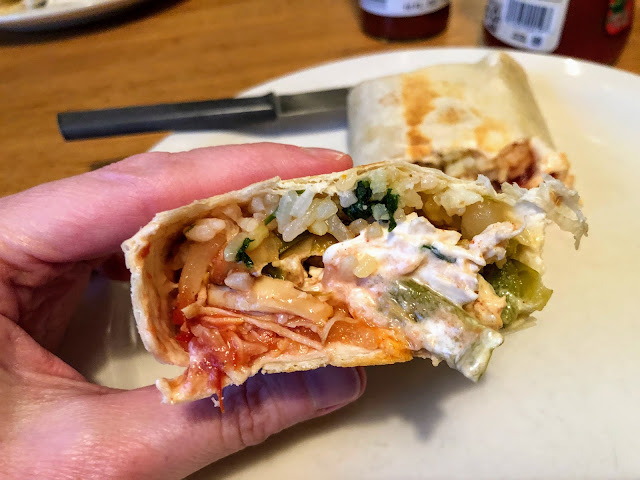 And on date night we had the oldie but goodie Cheddar Bacon Ranch Chicken burgers. 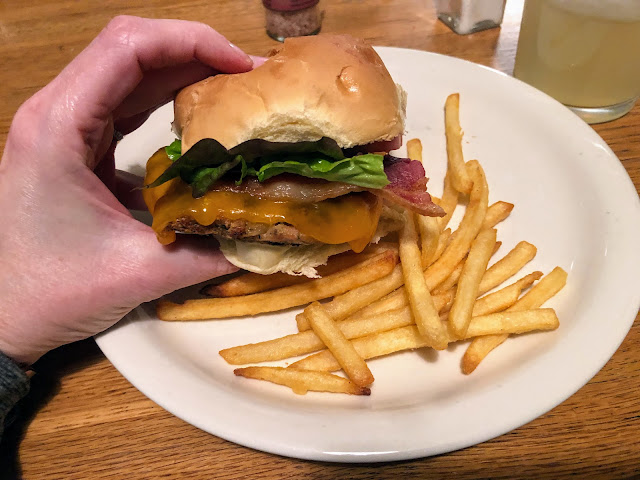 The TL&DR version of the story that I shared last week...out of nowhere a Hot Startup contacted me on LinkedIn about a job that sounds near perfect for nice $$$.  I had a great panel interview with them this week and feel even more enthusiastic about the job now.  If they decide to move forward I'll have another interview with a Big Cheese this week, and I asked to have a follow up interview with the supervisor as well since our conversation was brief and he didn't leave much of an impression.

And then Player 2 entered the game!  Please understand it is not normal for jobs to come to me, I go to them so having TWO opportunities come up without me doing a thing is unheard of.  A former coworker said that her company is opening up a job that is right up my alley, and asked if there was any possible way that I would be interested...oh yeah, just a little bit.  Player 2 is a newer startup that several people who worked at my previous employer have joined.

Player 2 was very nice and I have a second interview with them this week.  The red flag is that it's super informal.  I don't know what the job title is or what the pay is.  Why haven't I asked about these minor details?  Because I can't resist playing the game that's why!  I think that this one has less of a chance of working out so my main reason for going through the interview process is to be less "all in" on Hot Startup and to continue to blow off steam on my frustrations with my current job.

I think that staying in my current job is the most likely outcome, and that's fine.  There are still things to learn blah blah BUT talking to these other companies has really cemented that I'm bored and that my current employer isn't a "happy" company even though they do a lot of things right.  So that's where things stand as of right now.

It's still pretty cold but most of the snow has melted off so the roads are accessible again.  I got two count 'em two outside runs this week including my Saturday morning long run so that was nice.  My long runs will get longer by a mile each week for the next few weeks, so this week was "just" 6 miles and next week will be 7.  I'm ready to ramp things up again.  I've been trying to "just run" instead of slavishly trying to run All the Miles and I have to tell you that February has been my lowest mileage month since...since...thank you blog archives, since August of 2018.

Move over AFI Top 100 movies, I finally have a TV show that's treadmill worthy.  Season 4 of The Marvelous Mrs. Maisel is out and it is fabulous.

I've skipped my AFI Top 100 rewatches for a few weeks, so let me catch you up.  First of all, it made my day that Grace posted her update for the past few months this morning.  Here's what I've got:

Some Like It Hot.  I've seen this movie a million times and love it to pieces.

On the Waterfront.  For those times when you coulda had class and coulda been a contender.  I know I'm supposed to tell you that it's a brilliant and important movie, which it is, but sheesh I struggle to get into it.  There's just something about it that's "off" to me.

The Grapes of Wrath.  It's pretty good, albeit a little talky and preachy here and there.  What I'm trying to say is that it's worth watching but I forgive you if you skip it.  I started this on the treadmill and moved it to the couch and watched it in pieces in between episodes of Love is Blind...now that was an interesting pairing.

Annie Hall.  I feel like I spent my entire childhood watching my parents watch Woody Allen movies on repeat and it's all one big pretentious angst ridden blur.  I would not have signed up to watch this again but for the companion Unspooled podcast, and on a whim I asked my husband if he wanted to see it.  He said the same as me, that he'd already seen it at some point in his life and he was pretty sure that it was a whinefest but sure he was down to watch.

Well lah di dah to us because from the get go it was fresh and brilliant and new and stands out as one of the best movies that we've seen in a long time.  We were both very surprised.  And then I went looking for a recap video to give you a taste and everything that I see looks whinny and pretentious.  The whole is truly greater than the sum of the parts.

The Christie Affair was good enough that I finished it but so far fetched that I was left rolling my eyes.  ISO the next read!

Posted by Birchwood Pie at 8:39 PM