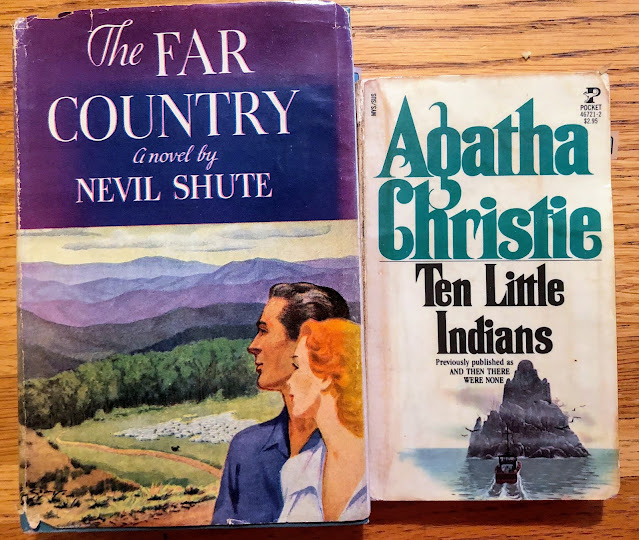 One of my favorite sources for reading ideas is the Sarah's Bookshelf podcast.  On each episode, Sarah asks her guest for:

I'm going to be a pretend guest on Sarah's podcast and give you my answers.

Two Old Books that I Love

Once I limited myself to just two, the answers were clear.  I read both of these books for the first time in junior high, have reread both of them many times throughout my life, and plan to continue rereading them.

The Far Country by Nevil Shute

Set in the early 1950's, the story follows Jennifer Morton, a young woman living a very dull and drab life in post-WWII London.  After a family tragedy, she is invited to visit her relatives in Australia and discovers a whole new world and seemingly endless opportunities.  Adventures ensure, but will Jennifer be able to stay in her new found home or will she have to go back to Drabland?

And Then There Were None by Agatha Christie*

*Yeah, yeah I'm aware that the book in my picture has a different title, but it's the same book.  And Then There Were None is the original/most polite title.  Google will happily fill you in on the third title that this book was published under.

Ten people are invited to a luxury home on Indian Island off the coast of England.  Once they get there and the boat leaves, they discover that they are the only people there and no one seems to know the house's owner.  There's a copy of the poem "Ten Little Indians" in every room, which is about the ten little Indians dying one by one until "and there were none".  It is soon discovered that while these people are all strangers, they do have something in common.  Each has been responsible for at least one death in circumstances that cannot be prosecuted==>they've all literally gotten away with murder.

People start dying, and the deaths tie to the descriptions in the poem.  Can the survivors follow the clues and figure it out in time?

What I love the most about this book is that there is a point in time toward the end where no one knows what has happened and nothing can be explained AND IT'S SO CREEPY!  It scared me to death when I was twelve and it still gives me the shivers now.  Oh don't worry, the final chapter tells us everything but there's that moment where all of the characters in the book and the reader just don't know.

I have a huge beef with every single movie and TV adaptation of this story, because they mess with the ending.  The original stage play and first movie changed it completely.  There's a Russian version from the 80's and a more recent British TV version that come close, but they both leap into the explanation and don't give us the pause of "OMG no one knows what's happening and we're going to take a minute to sit with the feeling".

Two New Books That I Love

I think that in the context of Sarah's show, "new" means less than a year old, so I'm sticking to 2021 publications.

When the Stars Go Dark by Paula McLain

This was a recommendation that I got from Sarah, who described it as a unicorn book - just a magically good, good, good book.  All I will say is that it's about a missing teenager and the detective with a past who is assigned to the case.

It's part memoir, part advice, and pure poetry.  Alexi's mother committed suicide when she was very young, and she picks up the pieces that got her to the Olympics and beyond.

A Book That I Didn't Love

Sarah's guests usually dodge this one by naming a classic.  Yes I do loath A Christmas Carol because we spent something like two months on it in high school English but I'm not going to take the easy way out.

I try not to call out books that I don't like on the blog because I personally am not looking for a list of bad books and I don't want to be a troll.  In the spirit of not being a troll, I am not going to name one book but I'm also not going to dodge the question.  I'm going to change it a bit!  Here are all of my 2021 DNF's from my Libby checkout history.  In some cases I hated these books and in some cases I just wasn't interested enough to finish them.  And you know the drill, just because these weren't for me doesn't mean that they aren't great books for someone else.

The Sun Down Motel by Simone St. James

The Bad Muslim Discount by Syed M. Masood (he was a guest on Sarah's podcast and his interview was fascinating...the writing was excellent, but I just couldn't get into the book.)

Sorrow and Bliss by Meg Mason

The Unseen World by Liz Moore

The Push by Ashley Audrain

The Good Sister by Sally Hepworth

An Upcoming Release That I am Excited About

The Last Five Star Book That I Read

I've read a lot of really good books lately that I'd rate between 4.5-4.9 stars, but the question is for a five star book.  I gotta repeat myself with When the Stars Go Dark.  It really was that good.

Your Turn: You're the guest on Sarah's show!  What are your answers???

Posted by Birchwood Pie at 8:38 PM