Weekly Roundup: The Slowest Half 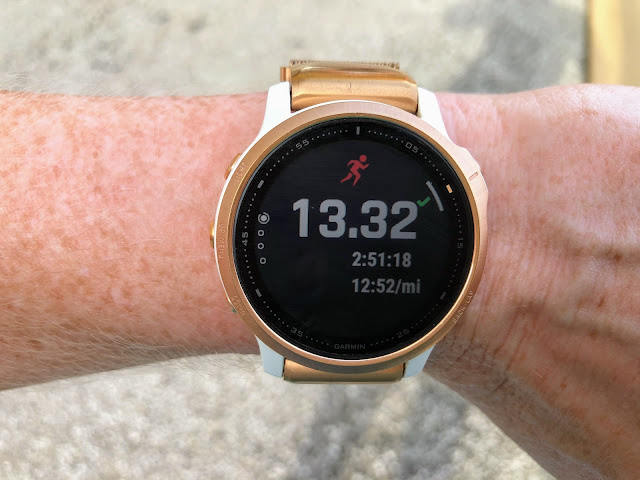 A weekly roundup: the slowest half, movies, and a podcast.

As predicted, I made it to the finish line of my 7th half marathon this weekend.  And as predicted, there isn't much more to say about it.  I don't want to say that it was a bad race, but just that if I'd known that it was going to be my slowest half, I sure would have skipped all those scorching hot long runs this summer.

Pros: The weather was perfect and it was great to be back.  The course is a bit different every year, so it was a nice mix of the familiar and unfamiliar.  I achieved my A goal, which was not looking at my Garmin the entire time.

Cons: exactly what I said before, running is a hot mess right now.  My body lost interest in running sometime in the 5th mile, so I had some epically long walking stretches in there.  I saw some people that I knew at the finish and told them that this was going to be my last half.  Instead of closing in on a sub 2:30 I'm getting closer to the 3 hour mark.  Yes there's a lot more than finish time to a race, but for me personally, there aren't many things that I can do for 3 hours straight and call them fun.

I was very surprised this morning when I was ready to run again.  The least time off that I've ever taken off after a half is 2 full rest days, and here I was ready to jump back into it.  Because my work schedule is changing and I don't run in the dark, my top priority right now is readjusting to the treadmill.  My goal was a mile but I talked myself into a mile and a half.  After that I ran two miles outside and felt pretty good.  Tomorrow the goal is two treadmill miles/one or more outside miles, and on Thursday we're looking at 3 treadmill miles which will be my weekday standard for a while until I feel like running longer.

The decision that I have from here is what to do about next month's half - my options are to run it as planned, drop to the 10k, or just skip the whole thing.  Yes in 48 hours I've gone from "with God as my witness I will never do another half" to "wait and see how things pan out".  There's no shame in skipping, and I can do a 10k at the drop of a hat.  With the half we're looking at: (1) will I have more endurance going in to it, (2) if I don't feel any stronger than I do today am I good with another "just finish" effort, and (3) is it going to mess with me/hurt me to have another bad half?  I'll keep you posted.

We saw two movies this weekend: one was his and one was hers.

His: Slacker and yes the trailer is a perfect representation of the movie.

Hers: First a Girl, which is a strange title for the story that we know as Victor/Victoria.  The one about the girl who pretends to be a boy who pretends to be a girl and the man who gets very confused.  It's a silly good time.  There's no trailer so here's one of the dance numbers in its place:

As a follow up to my AFI 100 post, I am going to be busy for quite a long time with the Unspooled podcast.  They recap each of the movies in the AFI 100 list, and since they don't do the movies in order, it's a nice random mix.  So far I've heard:

Each episode is a bit longer than an hour so the fact that I've heard seven episodes in one week says a lot about how much I like this show.

Posted by Birchwood Pie at 7:36 PM